IT salaries on a year-to-year comparison have risen 5.32%.  The median salary (for the positions surveyed) has gone from $82,775 to $87,175.  Janco forecasts that on average approximately 6,500 new IT jobs will be created each month in 2017 resulting in approximately 77,200 new domestic IT jobs. The CEO of Janco Associates, Inc., Mr. M. Victor Janulaitis said, “The recent election initially created a positive outlook for job growth in general and  Information Technology in particular. However, the 'drama' associated with the conflicts between the President, the media and the Democratic party are eliminating the probabilities  for implementation of the President's policies.  This is turn is causing companies to hold back."

The CEO of Janco added "With the election campaign proposed stimulus and constraints  on existing regulation by the new administration there would have had a noticeable improvement in new job creation, including IT." 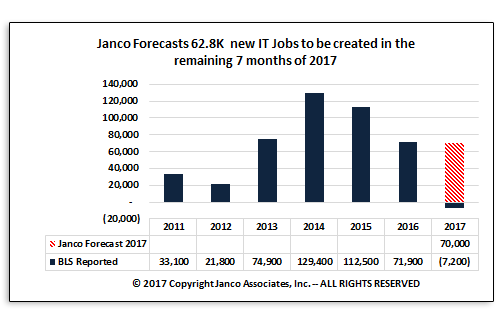 Janco interviewed over 127 (72 after the election) CIOs in the last several weeks as part of its 2017 IT Salary Survey process.  Janco's CEO said, "CIOs interviewed after the election and post-election processes were optimistic that there will be more incentives for increased IT spending and hiring.  It seems the tide has turned and they now feel there will be little chance for improved growth in IT budgets for the remainder of this year." He added, "Hiring prospects are poor at best, especially with the higher salary levels due to the overall increase in IT salaries at the end of last year."