Park City UT - Browser & OS market share changes. Janco has just released its Browser and Operating System Market Share White Paper. In both areas Microsoft shows weakness and loss of market share. For example, IE now has on 58% of the browser market versus over 90% in 2005. The CEO of Janco, Victor Janulaitis said, “Our findings are that Microsoft has lost almost 15% of its browser market share in the last three years alone. Firefox has remained static while Google has taken almost 10%. ” The CEO added, “With the move to tablets and smartphones taking hold, it easy to see how that trend will continue. ”

Janco has conducted this study of Browsers and OS market share since 1997 and has been a leader in forecasting trends in both browser and operating systems on user computers that access the Internet. The latest data on browsers reveals that the market share for Microsoft is 58.38% (loss of 9.95% in the past year); Firefox 17.71% (static for the past 12 months); and Google 9.64% (gain of 4.39%). 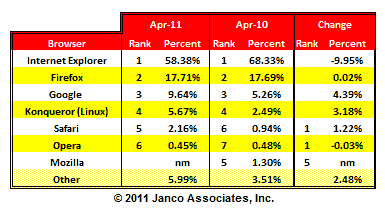 Janulaitis also stated, "At this point in its life-cycle, IE 9 has a much lower install rate than its predecessor IE 8. From our interviews of key CIOs we conclude that IE 9 does not have any new 'must have' feature that drive users to install the product. " 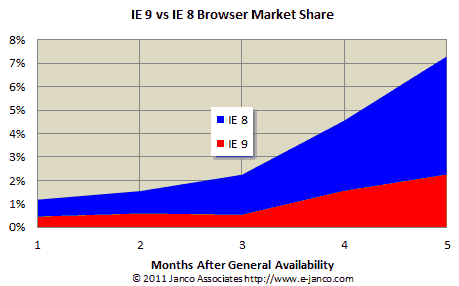 Janco says that Microsoft is beginning to lose its grip on both the browser and OS markets. The CEO said, “With users accessing the Internet with smartphone, tablets, and the resurgence of Apple for enterprise applications, Microsoft is no longer the only game in town. ” He added, “Microsoft can acquire all of the Skype that it wants, but the market for computing and access to the Internet has changed forever. Microsoft is the same place that IBM was at in the 1970’s - a dominate company in a market that has opened up to new concepts, alternative solutions, and aggressive competitors. The question is how Microsoft will respond. ” 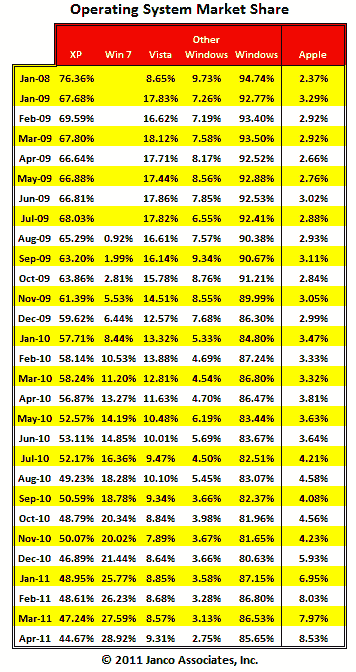