IT and Computer Science Job Market on the Upswing

IT and Computer Science Job Market on the Upswing - The U.S. unemployment rate has declined, and ended the year at 5.6 percent. Economists note that 2014 was the best year for job growth since 1999. For computer science and IT professionals, the news was also good. In December, 7,900 jobs were added (up from 6,900 in October), according to Janco Associates' analysis of employment numbers from the U.S. Bureau of Labor Statistics.

"In 2014 almost 113,000 jobs were added, which is a really good sign especially compared with last year this time when only 70,000 jobs were added through the same period," Janco CEO M V Janulaitis said in a prepared statement. "That is real a strong positive sign that the economy is turning around. " 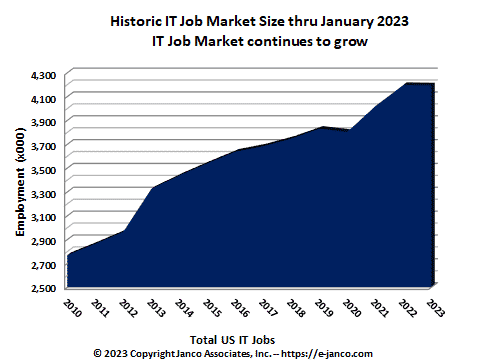 For current analysis of this data, go IT Job Market Size to see the historic job market growth trend data
Data as of January 2023