Park City – UT– www.e-janco.com – Initially over 105,000  IT pros lost their jobs due to COVID shutdowns. By the 12/31 the number of IT jobs lost will be 64,600.  In addition, with the second wave of the pandemic forcing more shutdown and slowing IT hiring.  Many of the CIOs and CFOs interviewed by Janco in the past few weeks feel that with the existing pace of re-openings, secondary shutdowns, civil unrest, and the election, normal IT hiring will not resume until late in the fourth quarter of this year, if not early 2021. Janco currently forecasts the recovery of the IT job market will not be until the second quarter of 2021.

The CEO of Janco Associates, Inc., Mr. M. Victor Janulaitis said, “We have found that a number of companies have already shuttered their doors or are expanding layoffs that are impacting the IT job market.  This includes the airline and travel industries that are now starting lay-offs.  As a result, IT professionals working for those companies are looking for new employment opportunities.  IT hiring will remain soft but improving slightly until after the election, when the public feels they can go back to a normal life, and more companies open their doors. Hindering recovery is the continued civil unrest, which is slowing confidence by the public, which in turn impacts corporate confidence.”  The CEO added, “In trouble cities, like Portland, companies are rethinking operations there all together. Also, many major companies are resuming existing operations slowly, but are holding back on any expansion until after the election.” 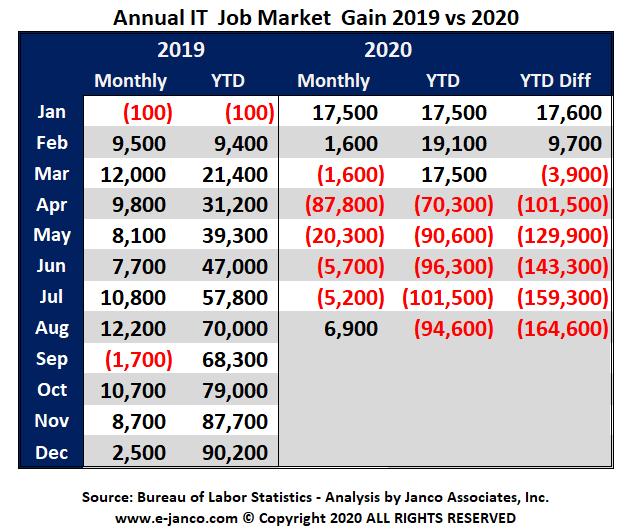 Janulaitis said, “On the bright side, for the first time in six months there was a net gain in the number of IT jobs.  Also, the BLS provided revised number downward for jobs lost by IT professionals by 4,400 for July. However, there still is a net loss of jobs in the last 12 months coming from Computer Systems Design/Related Services and Telecommunications – 55,700 and 26,100, respectively.” 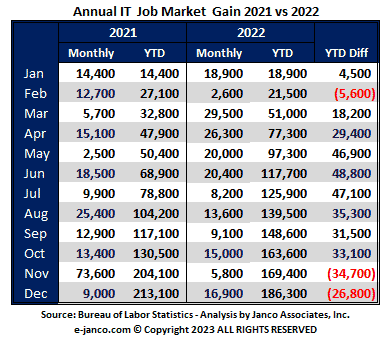 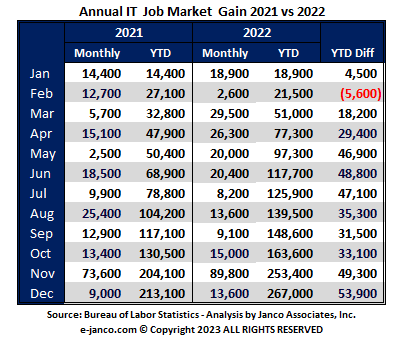 The CEO also said, “Spending for IT products and services has all but stopped as companies reevaluate the state of the economy globally as new waves of selected shutdowns occur. With more companies adopting WFH to address “social distancing” and avoiding in-office contacts, fewer companies are taking an aggressive approach to any additional spending for IT products and services.  It does not help that the US Congress and the President are at a stalemate on pandemic relief.”

Number of IT jobs not filled now is just over 100K. Janco's initial forecast for the number of new IT jobs to be added in 2023 is approximately 160K. 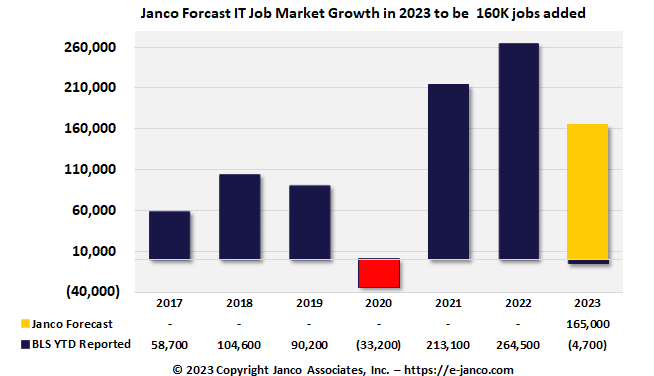 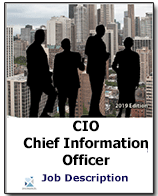