Cell and Smartphone Market Share - According to data for Janco, currently over one half of all searches on the Internet are conducted via Smartphones and tablets. This has altered the paradigm, for how businesses have to present themselves via the Internet. The sites must be responsive - be able to be displayed on devices of all sizes (small phone to dual monitor desktops) and formats (landscape and portrait). At the same time they need to comply with HTML standards which are easily and correctly indexed.

The role of designer is critical to this process. A detail job descriptions for e-commerce can be found at the web page Job Description Bundles.

According to October 2010 data from The Nielsen Company, 29.7 percent of U.S. mobile subscribers now own smartphones that run full operating systems.

Google's Android operating system powers the phones of 22.7 percent of smartphone owners, while Microsoft's mobile OS -- the latest is Windows Phone 7, which has only recently started to appear on new handsets -- trails with 14 percent.

"Apple's iPhone and devices with the Android operating system were the 'most desired' among likely smartphone upgraders, with Apple showing a slight lead among those ages 55 [and older], 18-24, and 25-34," said Nielsen in a post to its data-centric Nielsen Wire blog.

Google's OS is the preferred pick by U.S. users who now own a so-called "feature" phone, the term now applied to non-smartphones. Feature phones make up the bulk of the current market, with seven out of 10 mobile subscribers still using one of the less-expensive, less-capable devices. 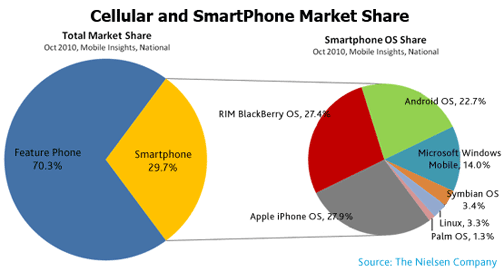 The Browser Market Share and Operating System Market Share White Paper data is by month starting in September 1997 through August 2010. The data sampled is internationally based (Just under 50% of the data points sampled are outside of the United States).