Job market for IT professionals improved slightly in May

Job market for IT pros improved. The June 2011 BLS report shows an increase of 10,000 IT related jobs in May. Janco Associates in association with eJobDescription.com analyzed the recent data and confirmed that since January there has been an up-trend in the number of individuals employed in IT jobs. The greatest increase, as a percentage, has been in jobs that are related to the IT support functions as companies are beginning to hire staff positions that were cut earlier in response to the recession. These jobs tend to be the "lower paying" ones within IT’s infrastructure.

The CEO of Janco, Victor Janulaitis said, “There definitely are some positive signs in the IT employment market. Companies are starting to fill positions that are open in support functions and where there are critical needs. " He added, “The flood gates have not yet been opened for general hiring as CIOs are still being cautious in keeping cost down while trying to improve overall service levels. ” 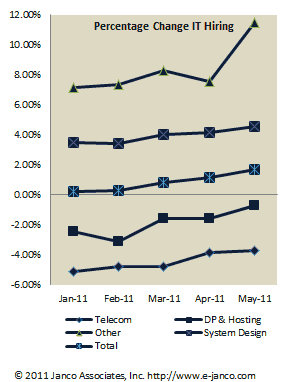 There has been a steady increase in the number of overall employment for IT related jobs. For the last few months the number of individuals employed in IT has increased by 7,300 in March; 9,100 in April; 10,000 in May; and 45,800 in the last 12 months.