Park City UT - Janco Associates - www.e-janco.com – Massive growth in the number of new jobs for IT Pros according to Janco, with 54,400 new IT jobs created in the January thru September period.

The CEO of Janco Associates, Inc., Mr. M. Victor Janulaitis said, “The current economic recovery has spurred on  job growth in general and Information Technology in particular. Even with all the turmoil caused by the “trade wars” and political uncertainty with the upcoming election, CIOs are hiring additional staff at breakneck speeds.” He added, “The increase in jobless claims triggered by Hurricane Florence was very modest, and smaller than expected. From what we see, the impact on IT hiring plans will be minimal.  Rather, many organizations are struggling to recruit and absorb IT pros who have the prerequisite skills and experience they need.”

Janulaitis note, “IT Pros, for the first time in several years, have the freedom to find new jobs. This is resulting in an increase in the attrition rates within the IT function. CIOs need to deal with potential staff losses, if they want to stay ahead of the game. To combat this many organizations have budgeted across the board increases in compensation for 2019 and are increasing current compensation for key IT Pros immediately as way to minimize potential loss of key staff. "
The CEO said, “From an infrastructure point of view, job descriptions which clearly define necessary skills and the roles/responsibilities need to be updated as the expansion of IT progresses.  To help address this, Janco has updated its IT Job Descriptions (https://e-janco.com/it-job-descriptions.htm) to address not only the technological components, but also the roles and responsibilities to meet the latest mandated compliance requirements.

Analysis of IT Job Market growth shows that in 2018 there has already been an addition of 54,400 new jobs.  That is 31,700 more new jobs than were created in the same period of 2017.  Janco conducted several spot interviews with two dozen CIOs in the last week of September.  All of those interviewed said they were actively recruiting for IT professionals to for new development activities and replacements for those who have left in the last few months. Attrition rates are the highest they have been in the last several years. Janco also found that several organizations have slowed the hiring process as they work to absorb the new hires. 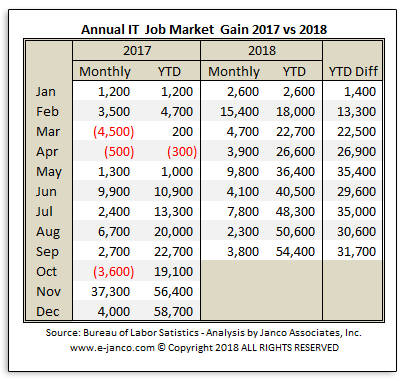 Median IT Salaries are up for IT Pros – Janco has started its data gathering for the next IT Salary Survey which will be released  no later than January 31, 2019

The CEO of Janco added, "IT and HR recruiting managers are now more optimistic the additions to the IT staff and are looking forward to increased budgets and hiring as they finish the last quarter of 2018. The only down side that most see is the unstable pre-election political climate and the lack of a trade deal with China.”

Janco interviewed over one hundred CIOs in the last several weeks.  Janco's CEO said, "CIOs are optimistic that the economy will continue to improve. Most already have approved 2019 budgets and have started to increase IT spending for hardware, software, and staffing.  It was not uncommon to be told bonuses and pay raises were in the mix.” 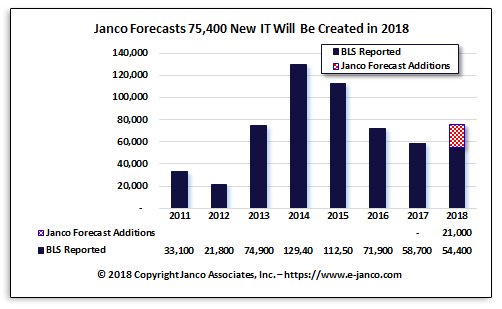