That was a little slower than expected. The issue of "end-of-life" for support was the primary driver. It is estimated that when Windows 7 support ends there still will be over 36% of PCs that have not been upgraded. That is a huge security gap and exposure that many enterprises will face. 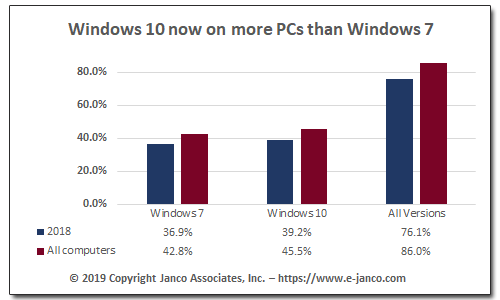 A secondary driver was the free upgrade offers expiration. That drove many enterprises to push the roll out of Windows 10 up.

Many IP pros are frustrated continue by the slow move to 64 bit Operating Systems and core applications. Even Microsoft continues to lag in the release of 64 bit based offerings, rather they still install many core applications in 32 bit mode.

When will Microsoft bite the bullet and drive users to to 64 bit now, and 128 bit in the future?

Over the past several weeks many enterprises to move to upgrade versions of the Operating Systems they were using. At the same time to upgrade core infrastructure programs like MS SQL and Firewall that will be at end of life soon.

All of this confirms that Information Technology, in some ways, now is a mature and aging set of software and hardware. The questions that has to be asked is, "Where will new advancement in IT be?" Will the cost of maintenance increase as fewer of the top IP professionals will no longer want to work on the older technology. Only time will tell.