IT Salaries up - 2019 IT Salary Survey Released

IT Salaries up 2019 IT Salary Survey Released - Year to year comparisons show IT salaries up by 4.35% and Janco forecasts 82,700 new IT jobs will be created in calendar year 2018.

Average IT Salaries up an average of $3,796 according to Janco in its just released 2018 Mid-Year IT Salary Survey .   At the same time its forecast for IT job market growth is that approximately 82,700 net new IT jobs will be created in 2018.

IT salaries on a year-to-year comparison have risen 4.35%.  The median salary (for the positions surveyed) has gone from $87,175 to $90,971.  Janco forecasts that on average approximately 7,000 new IT jobs will be created in each of the  remaining months of 2018 resulting in approximately 82,700 new domestic IT jobs. The CEO of Janco Associates, Inc., Mr. M. Victor Janulaitis said, “The economic picture has created a positive outlook for job growth in general and  Information Technology in particular. However, we are now seeing both an increase in attrition rates within the IT function and a number of positions that remain unfilled because qualified candidates cannot be found.  This is causing CIOs and HR department to re-think both existing salary pay rates and the salaries that are being offered to potential employees."

A summary of the report is provided to all participants. In addition those who provide more than 10 validated data points receive a free copy of the published report. An excel data sheet of the full study is provided to all participants who provide 50 data points or more. In addition, if place a request for a position that is not included in our survey, we can in certain circumstances provide you that data. If you purchase the survey with 24 months of update service that data typically is provided at no charge. 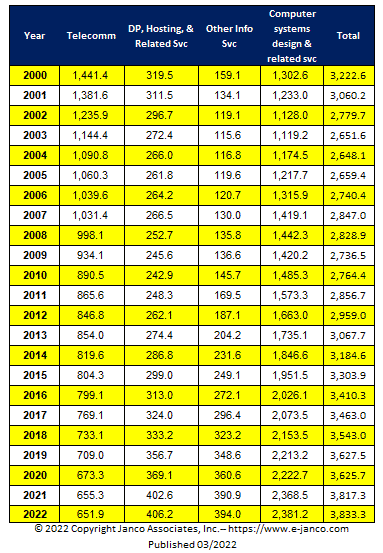 Data complied by Janco Associates with data as of December 2021

Internet and Information Technology Position Descriptions HandiGuide is the industry standard for IT and HR professionals.

IT Job Descriptions read on...

Internet and Information Technology Position Descriptions HandiGuide are a "world class" HR solution for IT and HR professionals.

The IT Compensation data is updated on a continual basis and is published in summary form in the January and June time-frame in Janco's IT Salary Survey.

IT Compensation Data read on...