A small survey of Canadian CIOs indicates women in the role are earning at least as much - and, on average, more - than their male counterparts.

The CIO Association of Canada released the results of a research study among its members which showed an average base salary of $155,000. Among the 18 per cent of respondents who were women, however, the average base salary was $156,000. When bonuses were factored in, women still came out ahead, at $189,000 on average compared to $186,000 for men.

Although the results came from less than 100 respondents, the fact that even a handful of female CIOs are getting this level of compensation is a healthy sign.

“I think the most important point to take away is that at things are looking at they're at least on par. At least we're not seeing traditional trends of men outpacing women from an executive salary perspective,” the spokesman said.

While there continues to be a dearth of women in IT jobs, they may find fewer barriers or glass ceilings to break through if they choose the CIO path.

The whole CIO role is a fairly new thing. It doesn't necessarily have any ties to the past or old boy's clubs.

A full 86 per cent of respondents said they were either satisfied, more than satisfied or very satisfied with their jobs. Of those who were unsatisfied, they worked for larger firms and 66 per cent made less than the average salary, according to the research.

The survey sample size isn't large, but more than half work for large enterprises of 1,000 employees, and 33 per cent have at least 100 IT staff to manage. Those in mining and financial services tended to make the greatest amounts: $285,000 and $247,000, respectively. This data does not include bonuses.

In some cases, Canadian CIO salaries dwarf that of U.S. CIOs. Last month Equilar, a firm which researches executive compensation, said the top 5 highest-paid CIOs took home a base salary of US$500,000 to US$821,000. That contrasts sharply with the US$142,914 that was reported by consulting firm Janco Associates in January of this year. One thing that's interesting is the CIO salaries in Canada seem to be less than in the States. Part of it could be explained by the fact that a lot of organizations that are global are headquartered in the States. The international scope may be a factor.

While the CIOCAN survey did not look specifically at the impact of the worldwide recession, they believed that alternate forms of compensation like flex hours and more work-life balance perks may not be available to many CIOs.

From a leadership perspective, CIOs are becoming more in the day-to-day than ever right now. Because of what's happening in the economy, they really need to be there and if necessary to step back and rethink some things. The highest-paid CIOs in Canada come primarily from Toronto, Edmonton and Vancouver, according to the survey results.

Note in the chart below that a few IT positions have maintained salary levels:

Compensation for C-Levels with Information Technology 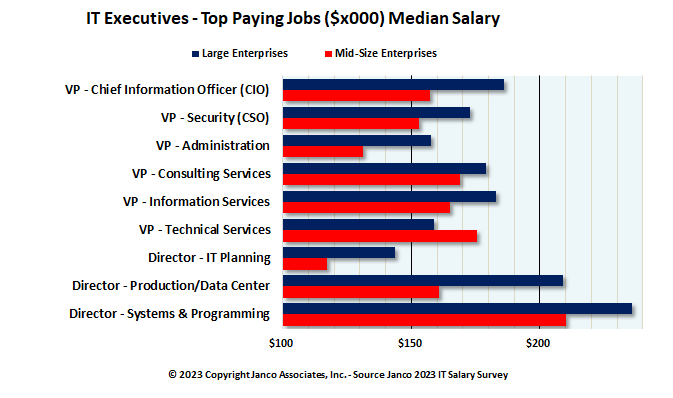 A View from the Trenches

Dice, noted that the IT job market has gotten markedly worse since the winter.

A Dice survey of 1,900 employers indicated that 58 percent foresee salary levels declining for new hires. A mere 7 percent said salaries would go up, with the rest saying no change.

“That's decidedly down from when we asked the question six months ago,” Silver said. 32 percent expected declining salaries.

Alarmingly, 43 percent of respondents said layoffs are likely or very likely for technology professionals in the next six months.

It's a Contractors' World

As tech employers get nervous, they're trying to fill more jobs with part-timers.

“We're starting to see more of a shift toward contractors or consulting work, which is exactly what we would expect to see,” Silver said. “It's what we saw during the last downturn a few years ago. ”

“There are some critical projects, like infrastructure projects that help companies become that much more efficient, that have to get funded. Yet employers are still a little bit gun-shy about hiring people on a full time basis.”