Janco Associates has issued a warning that mobile Internet users are facing a rapidly escalating threat from hackers and spyware.

Park City, UT - Janco Associates has issued a warning that mobile Internet users are facing a rapidly escalating threat from hackers and spyware. Janco say that as the computing capacity and the popularity of small mobile devices has increased, so have the risks of attack from other mobile devices and computers, creating a growing threat of mobile users losing their privacy or confidential business data.

The CEO of Janco, Victor Janulaitis said, "In interviews with several CIOs, we found that they were concerned about how they can adequately manage the risks introduced by mobile devices. In addition, they feel that security is the greatest obstacles to rolling out more smart devices. "

The CEO added, ". . . there is no anti-virus protection for most mobile devices. In the case of the iPhone there is not even a spam filter -- it is all dependent on the email provider. Add to that that it is estimated that the number of new smart phones and tablet PCs would outpace desktop computers and notebooks. Users and business should have security applications in place, such as encryption, in order to protect their mobile devices from data threats and illegal access. " 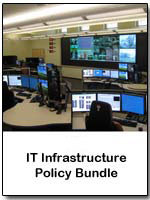 Janco has just updated its Security Manual Template to address issues faced by enterprises by defining acceptable access and use policies that can quickly be implemented. It addresses issues such as how to manage in today's threat driven environment. In addition Janco has added a Mobile Device Access and Use Policy to its popular CIO IT Infrastructure Policy Bundle.

Both of the products are delivered electronically and come as an easily modifiable Microsoft WORD file. They include everything needed to customize them to fit an organization's specific requirements. The templates contains proven written text and examples.

For more information go to security.