Calming Voice Amid Jitters - The New York Times had a piece Monday about how the wave of worry about the economy could feed off itself, leaving companies even more hesitant to hire.

It quotes the chairman of consulting firm A. T. Kearney, saying:

Everybody gets into this hangdog demeanor with respect to economic expectations. People sit on their wallets because they feel like everything is going to get worse, and things get worse because people are sitting on their wallets.

Gartner and IDC both recently boosted their projections of IT spending for 2011, but some IT leaders have noted some wariness among customers. Networking companies such as Cisco, Juniper Networks and Brocade expect to take a hit, for example, due to the belt-tightening going on in government. Governments at all levels, too, have been among the leading job-cutters of late.

However, another analyst told eWEEK he's sticking with his prediction for continued slow growth in the IT industry. It quotes him, saying:

A week's worth of events doesn't tell you what the economy is like. There was already weak growth going on.

Companies are using technology to improve profits and using profits to buy technology.

That doesn't necessarily say anything about hiring, though. The unemployment rate for tech professionals, however, dropped from 5.3 percent in January to 3.3 percent in June, which Dice.com's Alice Hill calls "pretty close to full employment," in this Bloomberg piece in the San Francisco Chronicle. Recent IT hiring surveys for the rest of 2011 have been upbeat, though Victor Janulaitis, CEO of Janco Associates, who generally takes a more guarded view, on ejobdescription.com foresees more churn in IT employment as employers turn to more flexible staffing models and cloud computing. 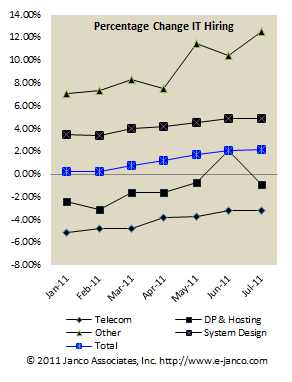