IT job recovery slower than rest of job market

IT total number of jobs declines one more time - for the second month in a row there was a net loss in the number of IT jobs! 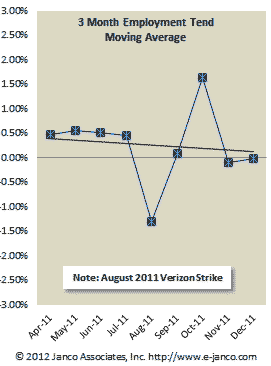 Janco Associates and eJobdescription.com report that there was a net loss of 300 IT jobs in December according to the latest BLS data. The primary driver was the telecommunications sector (4,100 jobs lost) while jobs were gained in Other Information services (1,300 jobs added), Data Processing and Hosting (2,000 jobs added), and Computer System Design and Related Services (500 jobs added). For the last three months there has been a net decrease of 800 jobs (see table below) including the effects of the termination of the Verizon strike included in the data. The CEO of Janco and eJobdescription.com, M.V. Janulaitis said, “Companies are continuing to watch expenses and IT seems to be a function that continues to be the focus of these efforts in many organizations. IT is often viewed as a cost center putting head counts and capital budgets under constant scrutiny. IT jobs are typically not being cut, rather openings are left unfilled. " He added, “Some Chief Information Officers (CIOs) are felling continued pressure to control costs and are looking ahead to delay 2012 hiring and projects as they begin to push those expenses back until the 3rd and even 4th quarters. ”

In Janco’s Salary Survey which is to be released Monday January 9th, Janco reports that salaries have remained flat in large organizations, and on the bright side, a slight increase in mid-sized and small enterprises. 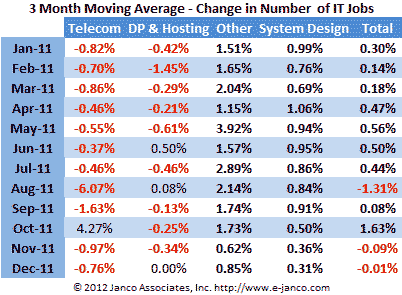 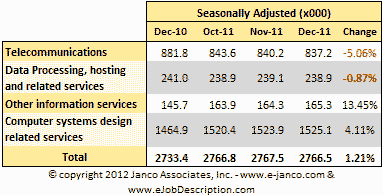