IT Job Market Shrinks by 6,600 in September

IT Job Market Shrinks by 6,600 in September and the number of jobs added in August was adjusted DOWN from 12,400 to 3,200. The CEO of Janco Associates, Victor Janulaitis said, “The jobs picture for IT Pros is not as bright. On top of the September job losses, the number of IT jobs added in July continues to be reduced - to 13,600 in the August data from 20,400 reported in July data, and in the current data it has been reduced to 11,000 jobs added. That is a reduction of 9,400 jobs of just that month. Looking back at historical data it seems the BLS data OVER REPORTS the number of job created and then adjusts downward. ”

According to BLS data, the entire US job market in the US did increased by 114,000 jobs in August but still over 400,000 dropped out of the labor force. Most of those jobs added were in the public sector.

Janco finds continues to be concerned that the data shows the labor market participation rate which, though increasing .1% to 63.6%, remains at record low level. The CEO of Janco Associates said, “The year to year comparison of workforce participation shows how deep a hole we are in. Until those percentages turn around there will be little hope for a strong recovery. ” 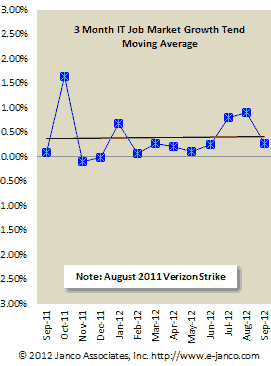 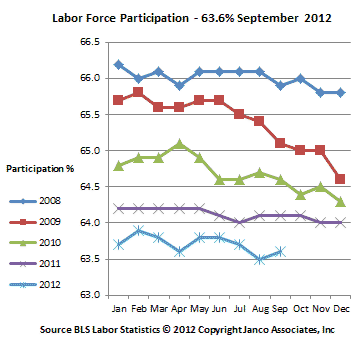 In a continuing survey of CIOs Janco has found many CIOs are cautious but feel that overall hiring will improve significantly in 2013 and are initially budgeting accordingly. The CEO of Janco said, “In telephone interviews in late September of 92 US based CIOs we found that many are looking ahead to a brighter future with increased staffing in late spring and early summer. CIOs are keeping their current overall FTE (full time equivalent) headcounts level but are looking to replace consultants and contractors with full time employees. "   He added, “A few CIOs in selected areas like SF Bay Area and Boston are continue to be bullish. ” Further he said, “One in ten CIO’s are looking to hire within the next 3 months to fill short term needs. These CIOs are looking for particular sets of skills to meet the demands of mobile computing and towards implementation processes which will support users to use their own personal devices - BYOD (Bring Your Own Device) - to minimize capital expenditures and improve ROI. ”