Janco forecasts 82,500 new IT jobs will be created in 2018 and salaries should rise across the board with demand high for experienced IT Pros

Park City – UT– www.e-janco.com – Salaries and Hiring of IT Pros is on an upswing according to Janco. Janco’s has just issued it's 2018 IT Salary Survey  and CIO Management Toolkit. At the same time, Janco has completed its review and analysis of the latest BLS employment data.

IT salaries have have gone up on average by 3.5% in the last 12 months.  The median salary (for the positions surveyed) has were $87,072 and now are $90,115.  Janco forecasts that approximately 7,000 new IT jobs will be created each month of 2018, resulting in 82,500 new domestic IT jobs. The CEO of Janco Associates, Inc., Mr. M. Victor Janulaitis said, “The recent tax law changes and reductions in the number of regulations has created a positive economic outlook momentum for job growth and  Information Technology jobs in particular.  When IT jobs are brought back to the US, a re-vamped immigrations process is legislated, and infrastructure spending increased the prospects for IT Pros could not be brighter." He added. "With all of this, there will be a greater need for US-based IT resources.  IT hiring and salaries will be up." 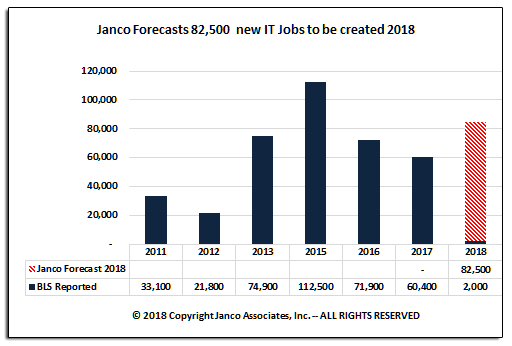 All of that comes at a time when the labor statistics from the BLS show an economy that has over 96.7 million individuals not even in the labor force, with an unemployment rate that is 4.1%.  Those 96.7 million people are a resource to provide the capacity for growth.

Janco interviewed over 120 CIOs in November and December of 2017 as part of it's IT Salary Survey data gathering.  Janco's CEO said, "CIOs interviewed after the passage of the recent tax legislation are optimistic that there will be more incentives for increased IT spending and hiring. " He added, "SMBs are actively looking for experienced managers who are able to manage the creative technology initiatives that will be started in the first half of this year."

The CEO added, “In reviewing the last IT job market data , it is very clear that there has been a downward bias in the number of new jobs created.” He added, “In contrast from recent interviews with a number of CIOs and CFOs Janco found that many C-Level executives have budgeted for more growth in 2018.  Most of these executives interviewed are comfortable with the overall direction of the economy and prospects for the creation of new IT jobs.  This also was reflected in their planning for greater hardware/software acquisitions and major application development and implementation.  Many of these executives feel they will have to come back and get more monies in the third and fourth quarters.”