Tenure of IT Pros Impacted by IT Job Market

Janco has just completed an analysis of the current and historic tenure of the U.S. labor force, telecom workers, professional and technical staffs (IT Pros), and CIO. The findings show that telecommunication workers are seeing a dramatic drop in the number of job opportunities they have. As more automation takes hold along with AI there are fewer new opportunities.

It is almost like switchboard operators in the 50's and telephone receptionists in the later part of the 90's. In both cases, as the number of jobs disappeared the more tenured employees moved on to new careers or retired. The same pattern is taking hold for telecom workers. 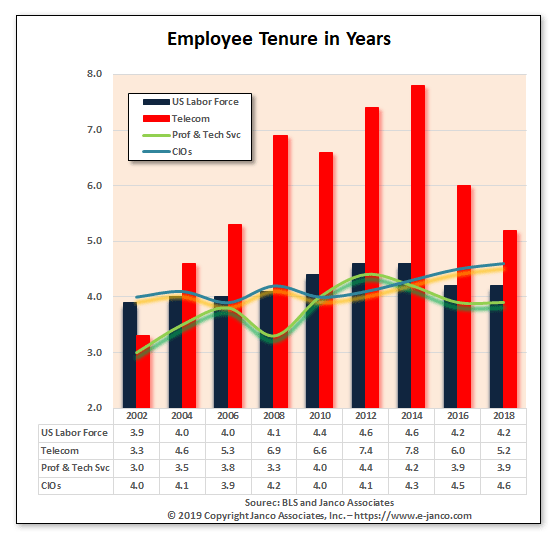 Telecom workers tenure peaked in 2014. Since then automation and AI have taken hold. Many of the seasoned pros in that field have moved on or retired. New entrants in that section of the IT job market have salaries that are lower than those they have replace - except for the individuals in the most senior roles in larger enterprises.

Over all US Labor Force Tenure

Since 2002 the average tenure for the US labor force has moved from 3 years and 11 months to 4 years and 3 months in 2018. At the same time, the overall size of the individuals employed in the US labor market has grown to just under 270 million individuals.

The latest trends have have the overall labor market increasing at the same time as salaries are going up.

The overall IT job market has increased to around 3.6 million individuals. The greatest increases have been with individuals classified as Computer Systems Design and related services. Salaries for those individuals can be upwards of $120K to $150K. 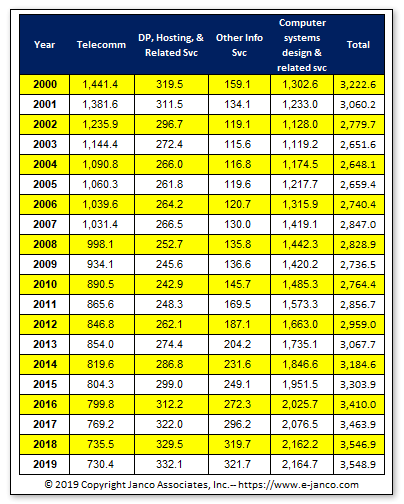 Read on IT Job Market