Has the Fat Lady Begun to Sing for Netscape?

Park City, UT, - In an interview today, M. Victor Janulaitis discussed the latest results of an extensive ongoing study, The Internet Browser War. In this study, he found that Microsoft's Internet Explorer browsers (versions 2 through 5) were used in 65.26% of all internet sessions versus Netscape's browsers (versions 2, 3, and 4), which garnered less than 28% during the week ending November 6,1999. When the survey began, Netscape Browser usage was over 42%.

The data in the study covers over a 2 year period from September 9, 1997 through November 6,1999 including over 2,500,000 Internet session data points. The data shows usage of Microsoft's IE has consistently remained at or near 65% for almost half a year, reaching as high as 70%. Since the survey began, Netscape has lost over 15 points in market share.

Mr. Janulaitis said, "While the fat lady hasn't begun to sing yet, Microsoft's IE product has clearly dealt a killing blow to Netscape and is not going to relinquish the pressure in the near future. Web designers, who haven't taken notice by now, better re-think their position. " 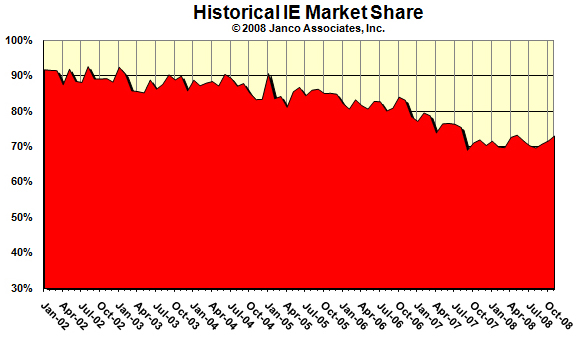