Salary Strongholds IT paychecks for managers and staffers going up

Despite the slowing economy, IT paychecks for managers and staffers keep going up--but for how long?

Salary Strongholds IT paychecks for managers and staffers going up - Many say that what goes up must come down--just ask tech investors. Although that doesn't seem to be the case for IT professionals' salaries just yet, there's caution in the air.

So far, despite the collapse of dot-coms by the dozens, a bear stock market, slowed IT spending, and growing pessimism about the economy, the just-released InformationWeek Research National IT Salary Survey of nearly 20,000 IT staff and managers indicates that salaries are holding strong.

Median annual compensation reported by 8,680 IT managers in the February and March online poll neared the six-figure mark for the first time. That figure, $97,000, was up about 10% from $88,000 last year. Staffers are doing well, too. The median total compensation for the 10,526 IT staff surveyed reached $71,000, up 8.5% from $65,000 last year. Wireless infrastructure and enterprise resource planning talent reap high rewards, as do workers with expertise in Internet and intranet design, development, and management.

That's the upside. But there's clearly a gray cloud hanging over the silver lining. Many IT managers and staff are concerned about their pay and job prospects going forward, and they're worried about the stability of their jobs. Both employees and employers know that current compensation reflects last year's job-market conditions and doesn't necessarily indicate what's to come. 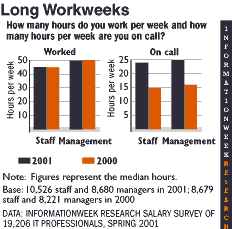 The figures mean different things to different people. "From a recruiting perspective, things have opened up," says Jane Landon, CIO of Prudential Insurance Co. of America's institutional investments business in Newark, N.J. , which benefits when high-tech workers are laid off at companies in nearby New York City. There are never enough highly skilled people, she says, particularly for Internet-related jobs--but now, at least, there's a bigger pool of applicants. "Our view is that we're getting the best and the brightest," she says.

Many IT professionals say it's taking longer to find jobs and when they do, salaries are lower than what they're used to. Those who stay at their jobs fear they'll feel the pinch, too, with slimmer pay hikes, fewer bonuses, and longer hours.

In the past year or two, "IT people could find a new job and increase their salaries significantly in a heartbeat," says Victor Janulaitis, CEO of IT management-consulting firm Janco Associates Inc. "That's no longer a guarantee. " Even those who stayed put at IT jobs could see their salaries rise from $50,000 to $85,000 over four years, including bonuses, raises, and perks, he says. But now, it's going to take longer for big pay hikes to kick in, Janulaitis predicts.

In fact, a soon-to-be-released survey of 500 CIOs conducted in March and April by Janco shows that over the last six months, CIO compensation is flat. "This is the first time this has happened since 1990," says Janulaitis. He also sees few CIO jobs becoming available. For the most part, people are staying put.