IT Hiring Slows -- Demand is Down

IT job market monthly growth has trended down for the two months. Budgeting is well underway and many CIOs want to hire but do not have the go ahead from executive management to increase spending

IT Hiring Slows -- Demand is Down - The latest BLS data shows a slight increase in the number of new IT Jobs - 7,000 jobs added in August. The CEO of Janco Associates, Mr. Victor Janulaitis said, "Based on our interviews with over 105 CIOs in the last 30 days, we concluded that CIOs want to hire but are being direct to hold off by management. In addition, as part of the 2014 budgeting process they are being 'constrained' in the number of initiatives that they can budget for in the coming year. Most of the CIOs we interviewed do not feel they will be able expand staff size over the next 12 months. "  In addition Janulaitis says, "Over two thirds of the CIOs interviewed say that the network infrastructure, which many have not been able to update because of budget limitations, they have in place is making it more difficult to implement new technologies without significantly increase costs. " He added, "…they all need larger budgets and staff to deal with this. " 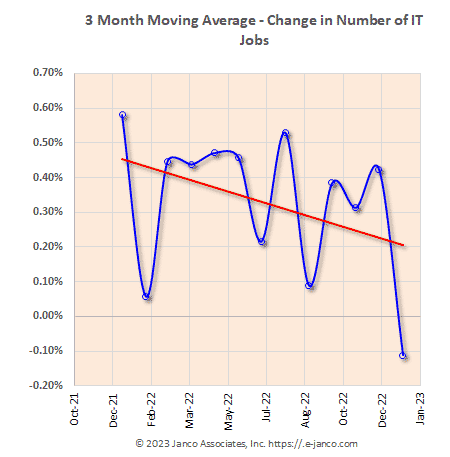 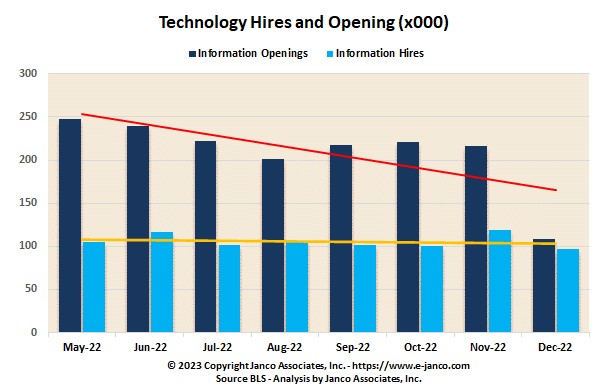 Based on BLS data analyzed by Janco over the last 12 months over 200,000 IT jobs remained unfilled due to a lack of qualified individuals. However the number of unfilled jobs trend line is down as the economy softens and CIOs and CFOs look to control costs and eliminate requisitions for positions that cannot be filled. Major pullback of the number of excess jobs for IT Pros occurred in December - layoffs have impact on number of unfilled jobs available for IT Professionals.

The three month moving average points to a mixed hiring environment. From a review of the latest BLS data, Janco has found that there was a net increase of only 7,000 jobs in July - the second month in a row with slowing in IT hiring. There was an improvement in computer systems design and related services of 2,400 jobs (versus 3,400 added in July); data processing and hosting related services lost 100 jobs (versus 1,600 jobs added in July); Telecommunications gained 2,700 jobs (and 3,200 in July); and other information services gained 2,000 jobs (versus 3,400 IT jobs in July).

The labor market participation rate fell .2% to 63.2%. There are 3,200,000 fewer individuals working than in 2007. The CEO said, "The over-all labor participation rate continues to be lower this year than and other prior year. This alone will make it a very difficult process and does not bode well for IT expansion and hiring. 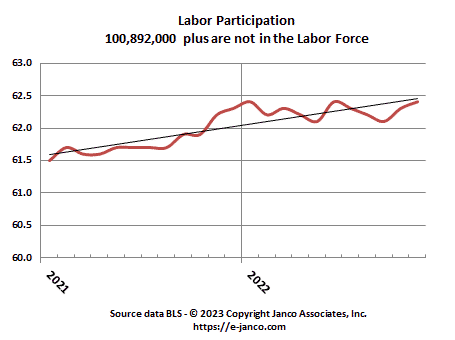 Over plus 100 million people in the U.S. are not counted in the labor force - see reasons why not working.

The health care job market continues to be a bright spot on the overall US labor market and is one area where IT Pros can go with the flow and find job opportunities. The implementation of Electronic Patient Records is one of the driving forces in the increased opportunities in this area.