ComputerWorld - Victor Janulaitis the CEO of Janco Associates was interviewed and mentioned in an article that was in ComputerWorld:

"There were about 10,200 IT jobs created in October, but the trend is slowing, said Janulaitis. In July, 17,000 IT jobs were added; in April and January, the number of jobs added was 16,000 in each of those months.

The number of jobs is still positive, but the situation varies regionally. Ohio has been hurt by a decline in manufacturing that has also reduced IT work.

Offshore outsourcing is having "a fairly strong impact" on IT employment, said Janulaitis. Students coming out of college are facing trouble starting a career "and a lot of that is driven by jobs that are taken by non-U.S. nationals in our economy, and a lot of that is H-1B [visa holders]," he said.

"Why are we talking about more H-1B visas for people when we have people who are unemployed?" said Janulaitis.

The IT offshore industry relies heavily on H-1B workers to deliver services, and large offshore firms, both in the U.S. and in India, are the largest users of this temporary, non-immigrant, work visa. The issue is getting a little more attention in the unfolding 2016 presidential contest, but it remains to be seen whether this attention will have any impact. " 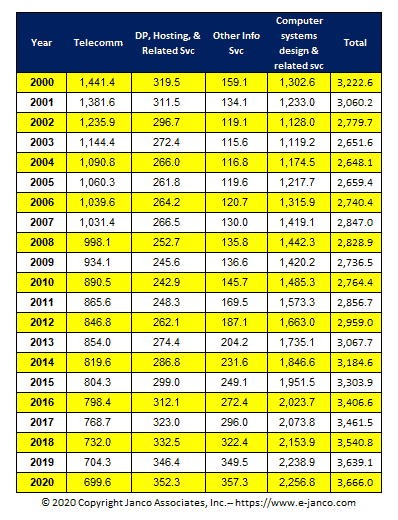 Data complied by Janco Associates is as of March 2020