IT job market growth continues to slow, Janco predicts that just over 91,000 new IT jobs will be created in the 2016 US job market

Park City - UT - www.e-janco.com – IT hiring slows again -- job market growth now 0.4% - not a good sign. Janco's analysis of the latest employment data from the BLS shows a continued slowing in IT job market growth. Earlier this quarter the BLS revised downward the number of IT jobs created in 2015 - currently the BLS says that 112,500 new IT jobs were created in 2015 versus the 125,700 that was initially reported in the BLS's January data release. At the same time Janco's analysis of the BLS data shows that the moving average of new IT jobs created continues to fall and remains at a growth rate that is at 0.4%. The CEO of Janco, M.V. Janulaitis said, "With only 19,000 new jobs created YTD the number of new IT jobs created is 14,900 jobs behind the pace of 2015. Considering that 2015 was a year were IT job market growth slowed, this is a bad omen. " 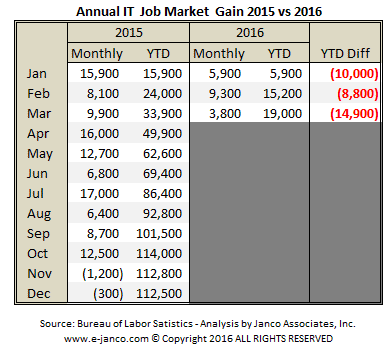 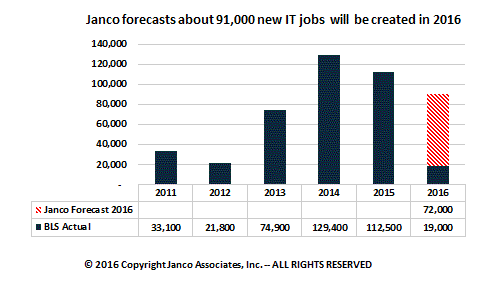 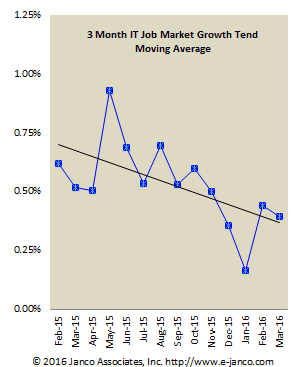 The CEO added, "There is a lot of uncertainty from both political and international instability. That is driving the slowdown in IT hiring. We feel that through the remainder of the calendar year, only 72,000 or so new jobs will be added to the already created 19,000 jobs. All the hype of IoT and cloud based applications is not translating into new IT Jobs. "

Janco interviewed over 80 CIOs in the last several weeks as part of its semi-annual salary survey ( https://www.e-janco.com/salary.htm ) data collection process. CIOs were much less optimistic this year than at the same time last year. A preliminary hiring forecast by job levels within the IT function shows that long term hiring plans for both IT Staff and "contractors/consultants" is flat.

As confirmation that a slowing of the IT job market, one software architect, who deals with leading edge productivity solutions and is looking for a new position, said, "Finding opportunities for IT professionals is difficult at best. Only those with the latest skills and extensive experience are even given interviews. " 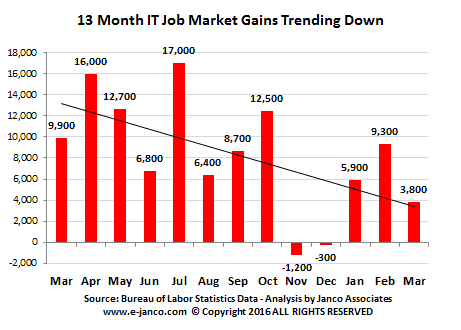 The CEO also said, "Instability is not a friend of IT expansion. In periods like the one we are going through , CIO and IT Managers are pushed to cut costs and often see a reduction in necessary IT infrastructure spending in areas like training, software and hardware upgrades, and elimination of non-essential consultants, staff and IT initiatives. In addition, as cost cut-savings technique, when "baby-boomers" retire many of those positions are not being filled. "

The CEO also said, "On the plus side, CIOs report that CFOs are now limiting incremental spending for IT related activities to those that have good business cases with support from the operational side of their enterprises. Few IT initiatives are being approved to upgrade technology for the sake of IT's desire to have the latest new thing. "