Park City, UT - www.e-janco.com – IT job market growth is not as robust in 2017 as in 2016 - Janco has just completed its analysis of the August BLS data on IT job markets growth. With Hurricane Harvey's devastating effect and the feeling by many that tax reform will not occur this year, Janco has adjusted downward its forecast for IT job market growth the remainder of this year. In summary, we forecast that IT job markets for 2017 growth will be the lowest it has been in the last four years. 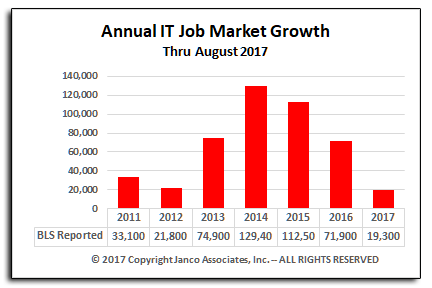 The CEO of Janco Associates, Inc., Mr. M. Victor Janulaitis said, "The economy seemrd to have taken off in many sectors. However, with Hurricane Harvey and the disfunction in Washington there seems to be a lower probability that tax reform will be implelemted this year. 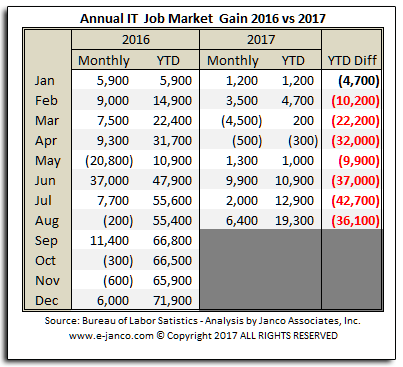 The CEO added, “As we reported last month, there continues to be a shrinking of telecommunication jobs due to mergers and layoffs. However, it seems that the trend is slowing."

Mr. Janulaitis said, "In the last 3 months over 18,300 jobs have been added to the IT job market. Based on our conversations with scores of CIOs, CFOs, and CEOs; we see that trend continuing. As a result, we forecast that the overall IT Job market will grow by over 36,000 jobs in the next four months. This would result in the creation of 55,000 new IT jobs in 2017. " 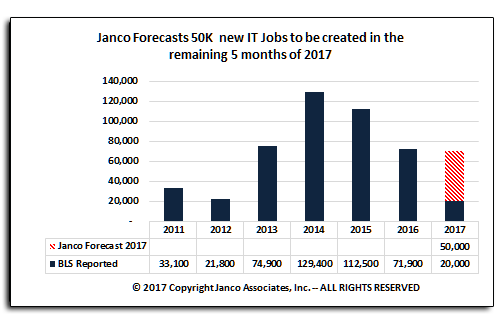 Janco interviewed 77 CIOs, CFOs, and CEOs in the last several weeks as part of it's IT Salary Survey process ( https://www.e-janco.com/salary.htm ). Janco's CEO said, "C-Level executives interviewed after the election were optimistic that there will be more incentives for increased IT spending and hiring. However, in conversations that optimism has waned." He added, "Hiring prospects are marginal at best, except for IT Staff at the worker level in the latter part of this year."

Janulaitis added, "There is limited demand for new executive and senior management positions. In, addition, we believe that there will a general increase in the headcount for IT staff towards the end of this calendar year. If a tax reform is implemented one would expect that IT jobs would be the first ones that were opened to be filled. The one area where there is increased demand is for experienced Disaster Recovery/Business Continuity senior and mid-level managers."

More information can be found on Janco's analysis of overall labor picture and the IT job market at https://www.e-janco.com/career/employmentdata.html.