Demand and Salaries soar for IT Pros according to Janco

As the unemployment rate falls to 3.8% a shortage of qualified IT Pros pushes IT Salaries up – Media IT Salary inches to $91K

Park City – UT– www.e-janco.com – Demand and salaries soar IT Pros according to Janco - Hiring is on a definite upswing for IT Pros and acceleration of salaries and use of contractors/consultants increases as many IT jobs go unfilled.  Janco just revised its forecast for new IT jobs to be created in 2018 to 82,700. The CEO of Janco Associates, Inc., Mr. M. Victor Janulaitis said, “The impact of the rapidly recovering economy  is  driving a significant increase in demand for IT professionals as more organizations are expanding the use of e-commerce and blockchain applications.  CIOs have the green light to expand budgets and staffing.  The prospects for a trade war has not yet had an impact on those plans." He added. "Overall we hear that regulations like GDPR for the EU and cyberattacks are driving the demand for more individuals in security roles and development for mobile device applications which enhance security and processing of Internet based transactions."

The President announced, “Janco’s 2018 Mid-Year Salary Survey, which will be released in the next few days, shows that the median salary for all IT professionals is now $90,971 – up 4.35% from the same time last year.” 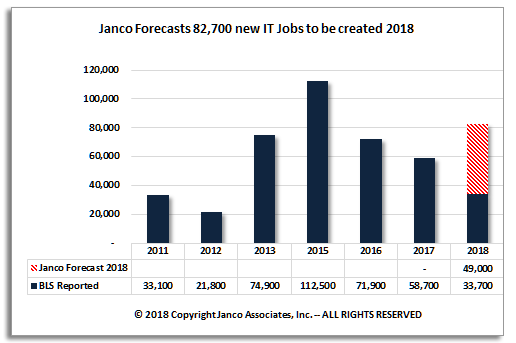 The CEO added, "A good example of the increased demand for IT Pros is the demand for Information Security Analyst with many working on GDPR and security complaince issues.  In our review of over 104 large and mid-sized organizations, we found that fully one-third are not yet compliant with GDPR which is required to be in place by the end of May." He added, "With the increased dependence on the Internet and cloud processing the exposure that enterprises face can only be mitigated by filling that role with qualified individuals.  As a result, salaries for experienced Information Security Analysts and the newly required position of Data Protection Officer (for GDPR) are sky-rocketing and are well over $100K." He added, “Preliminary results of our 2018 Mid Year IT Salary Survey show that the media salary for all IT professionals is now $90,971.

In support of that demand, Janco has released a 5 plus page job description for the Data Protection Officer and Information Security Analyst.

Janulaitis said, "Most of the C-level executives Janco has interviewed are expecting a booming economy.  They are planning for extensive growth and expansion.  The only part of the IT job market that is not doing well is that of telecommunications sector which has lost over 20,900 jobs in the last 12 months."

Read on Median IT Salaries...