CIOs and CTOs are in a constantly evolving field, however world class CIOs and CTOs focus on three areas to help them manage more effectively. They are:

Everything was humming along on a pace that was controlled and operating effectively. Then the pandemic (COVID-19) hit and how companies operate was shifted dramatically. Work From Home (WFH) became the way many business now function.

Everything from customer relations, inventory replenishment, order process, and staff meetings now are being accomplished on-line. Companies like Zoom (for teleconferencing) began to be he new normal. In the case of Zoom they had to meet the demand for their services plus update the overall infrastructure of their application to meet the security and privacy demands of their customer base. In one week, users were challenged with change after change the company had to implement to meet the security and privacy requirement of the WFH workforce.

As a result of this shift we conducted a limited survey of 97 CIOs and CFOs to see how their priorities had shifted. The survey was conducted over the telephone and via video conferencing. Each of the individuals survey had limited time to give us. However 92 of the individuals were able to spend the time necessary to complete the survey. As a result of the survey we updated our CIO Management Toolkit to reflect the new realities of the CIO's priorities.

Change from what was originally published - Updated to the latest data 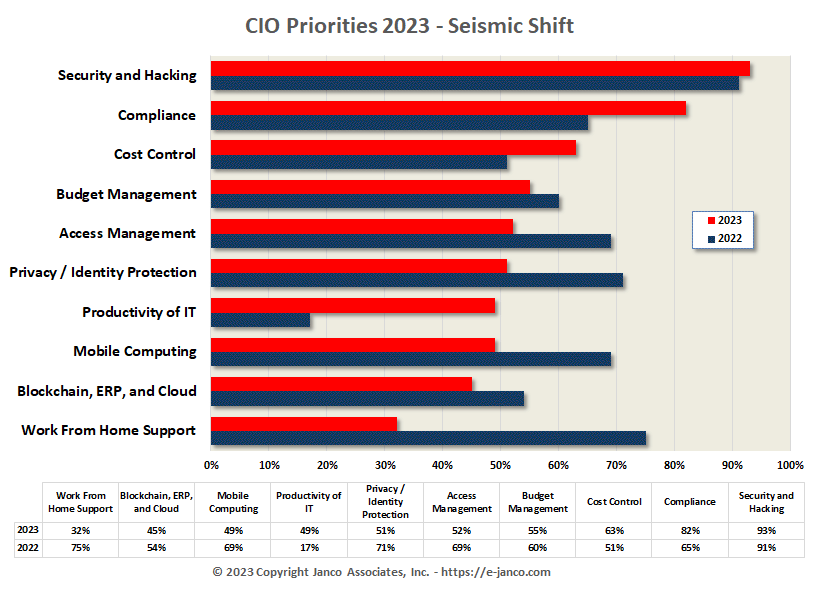 Survey conducted by Janco Associates, Inc. identified the the management and planning priorities that CIOs and CFOs have. CIOs and CFOs were asked to list and rank their top 5 management and planning priorities. 142 companies participated in the survey and included both large and mid-sized companies that had at least 150 professionals under their direct control. Most recent discusion of this can be found on the site. Use the search option to find topics.

Priorities shifted dramatically with the shutdown 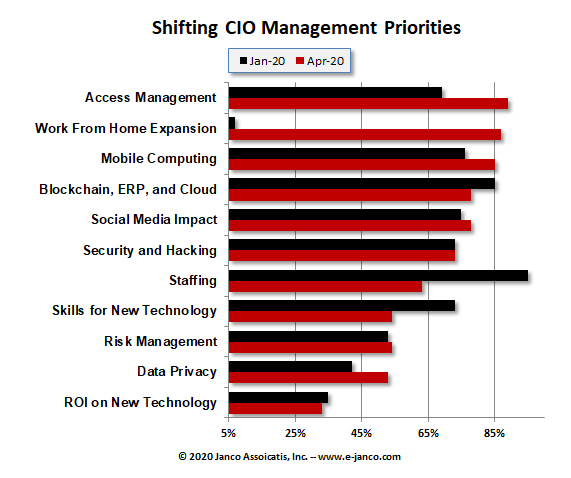 The greatest shifts in priorities were with the primary focus being shifted from staffing in January to Work From Home (WFH), Access Management, and Mobile Computing. Now CIOs are not as concerned as they were on getting addition staff to providing support for WFH and mobile computing with additional emphasis on access management.

A number of the CIOs and CFOs noted that with this almost immediate shift of office staff to remote computing there were bound to be breaches in security, hacker attacks and overall data leakage. In addition the issue of recored management, retention, destruction would cause some potential legal and compliance issues after the shut down is over.

Almost all of the other priories remained at the same level as before.

Janco will continue on this analysis as it prepares for its Mid Year IT Salary survey to be released in July.