June Brings Jobs To The IT Market

June Brings Jobs To The IT Market - Summer is here, temperatures are rising, and jobs are in the air. That's right, jobs. The analysts at Janco Associates have released their monthly report on IT job market trends, and the news is, dare I say it, encouraging.

The June numbers showed 9,900 IT jobs were added in the United States in June, finally surpassing January's 9,800 jobs, which had been the best month for IT job creating in the country so far this year.

The numbers for IT jobs created in the United States for IT professionals in 2013 have been all over the place. January got us off to a great start, but by February the slowdown had begun with 5,700 new jobs created, although hope was alive the drop was a minor bump in the road to recovery. That optimism turned to caution as the number of new jobs dropped to 5,400 jobs created for IT professionals in March. April's numbers continued that slowing trend with just 4,600 new jobs added.

Then last month, Janco reported that despite an improvement in the number of jobs added in May, the three-month average for IT job market growth trend for IT professionals was basically flat. What's more, the interviews Janco had conducted with more than 90 CIOs concluded many did not see any real push to expand staffing over the next 12 months.

And while Janco analysts are reporting confidence amongst the CIOs they spoke to is upbeat, the tone is still decidedly mixed.

"Based on our interviews with 96 CIOs in the last 30 days, we concluded that CIOs are not in a great hurry to hire new staff except to meet short-term needs until they see a clear trend as to what is happening with the economy," said Victor Janulaitis, CEO at Janco.

So where did those 9,900 IT jobs get added? According to Janco's report, computer systems design and related services saw an increase of 7,300 jobs (versus 6,100 in May ) and data processing and hosting related services had 1,800 jobs added (versus 200 jobs in May). Telecommunications gained 700 jobs (which matched the May numbers); and "other" information services gained 100 jobs (versus 1,400 in May). The increase in the number of new IT jobs in June also resulted in the three-month average changing to an "improved" job market. 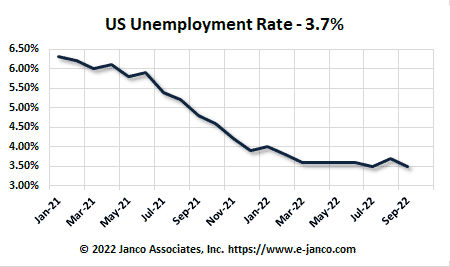 Current US unemployment rate. Read on...

After analyzing the latest Bureau of Labor Statistics (BLS) data, Janco says the labor market participation rate rose slightly to 63.5 percent, but reminded us there are still 3,000,000 fewer individuals working than in 2007.