Top 10 Wearable Issues CIO needs to address- One-third of the organizations surveyed have revealed they have more than 5,000 connected devices. Cisco predicts there will be more than 600 million wearable devices in use by 2020. These facts present a set of challenges for CIOs and IT enterprises of all sizes.

Janco has found that fewer than 1/3 of all organizations have policies in place for use of wearable devices on and off premises. What good is having a security guard check a briefcase at the door when the individual can be wearing or carrying a device that can caputre data, video, photos, and audio? 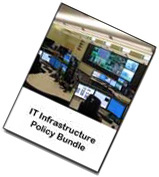