IT job market growth slow for the first 3 quarters 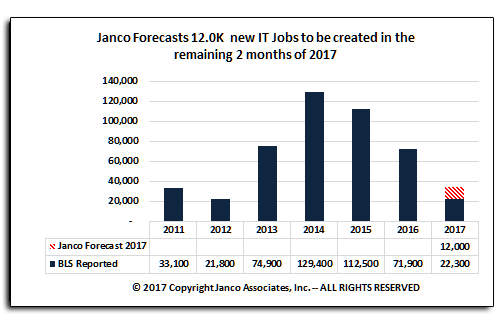 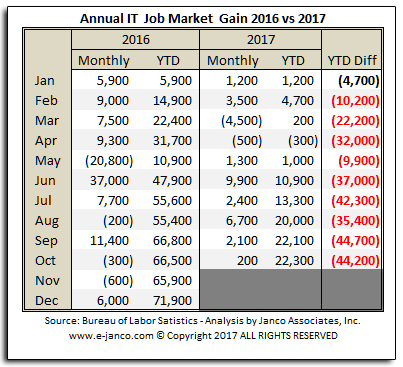 The CEO added, "In the last 3 months only 9,000 jobs have been added to the IT job market.  Based on our conversations with scores of CIOs, CFOs, and CEOs; the slowing is due to the impact of "events" which have placed a focus on maintaining continual operations versus new technology and application deployment.  As a result, we forecast that the overall IT Job market will see only 12,000 new jobs added in the last two months of 2017.  This equates to the creation of 34,300 new IT jobs in 2017. "

Mr. Janulaitis said, "Our analysis shows non-IT based companies are keeping IT staffing levels flat.  However, software and hardware organizations are actively recruiting.  We have seen a rise in hiring for start-ups and venture capital funded firms.  For example, there seem to be more startups in the mountain regions states of Utah and Colorado - signifying a move away from high-cost metro areas like the SF Bay to more employee friendly locations like Salt Lake City and Denver."  Janulaitis said, "As we reported, previously, there continues to be a shrinking of telecommunication jobs due to mergers, layoffs, and automation.  The jobs in that field have been automated are permanently lost - that is a loss of over 27,000 jobs in the last 12 months.  On the positive side, individuals who moved into telecommunications security seem to be in high demand."

Janco interviewed 91 CIOs, CFOs, and CEOs in the last several weeks as part of it's IT Salary Survey process ( https://www.e-janco.com/salary.htm ). Janco's CEO said, "Hiring optimism has waned with all of the major events from hurricanes, Las Vegas, and fires impacting overall perceptions." He added, "Budgets for the new year are still in flux as the impact of the proposed tax program is not understood yet. If the tax plan to repatriate offshore profits is passed that could be a boon for the IT job market."

More information can be found on Janco's analysis of overall labor picture and the IT job market on Janco's website at https://www.e-janco.com/career/employmentdata.html.