IT job market Forecast by Janco

Park City UT –Park City UT - - Janco Associates (https://www.e-janco.com) – Janco has just completed its analysis of the latest BLS employment data on the IT job market and completed interviews with 100 plus CEOs, CFOs and CIOs. In 2017 The IT Job market was impacted by the devastating effects of multiple hurricanes and fires and the feeling by many C-Level executives that tax reform would not pass Congress this year.  The CEO of Janco, Mr. M.V. Janulaitis said, "With the looming passage of the Tax Reform bill and the finalization of 2018 budgets, prospects look brighter for all IT professionals except for those focused on the telecommunication disciplines." 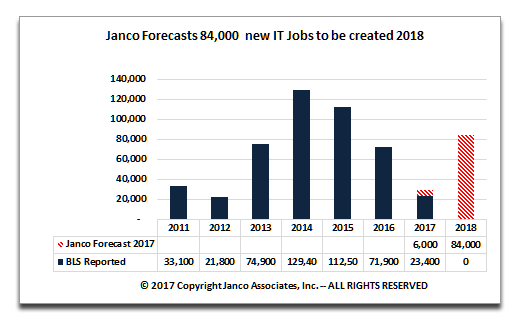 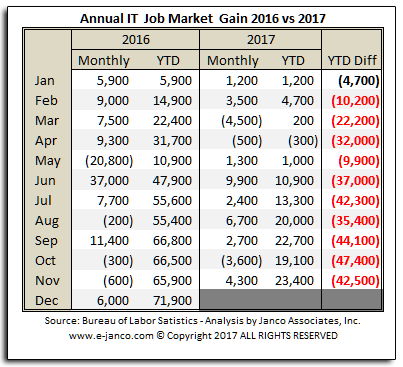 The CEO added, "Natural disasters have a short-term negative impact on IT job market growth but that typically recovers within 30 to 90 days. On the other hand, political uncertainty has a much more lasting negative impact. In our opinion, political uncertainty was the primary driver for the sluggish growth of the IT job market in 2017.  With the passage of the Tax Reform bill, trillions of dollars will be repatriated to the U.S and will be invested in this economy. That will result in the need for better technology infrastructure - meaning more new technology jobs."

Mr. Janulaitis said, "Based on budgets and plans for 2018 made by enterprises operating in the U.S., we see that there will be major development efforts in several areas: Blockchain applications making seamless transaction processing; Big Data applications that will focus on customized sales, marketing and service programs; digital and social marketing that will focus on the next population wave - the Millennials; IoT applications that will become even more pervasive as more device types and applications are implemented; and security and reputation protection will be addressed in a more robust fashion. CIOs and CSOs know that their careers depend on protection from cyber attacks and meeting mandated compliance requirements." He added, "These C-Level executives know that key to finding the right new staff will be a clear and concise definition of roles and responsibilities of individuals involved in those new areas. To meet this objective Janco has just released its 2018 Internet and IT Position Description HandiGuide."

Janco interviewed 107 CIOs, CFOs, and CEOs in the last several weeks as part of it's IT Salary Survey process ( https://www.e-janco.com/salary.htm).  Janco's CEO said, "Hiring optimism waned with major events from hurricanes, Las Vegas, and massive fires all impacting overall perceptions." He added, "Budgets for the new year are still in flux as the impact of the proposed tax program is not understood yet.  The Tax Reform packages with the ability to repatriate offshore profits, if passed, would be a boon for the IT job market."