Median Salary for IT Pros now over $93,000 according to Janco's IT Salary Survey

Demand is high for qualified IT Professionals - Salaries are moving up

Park City – UT – Janco Associates Inc. has just released its IT Salary Survey and reports that the median salary for all IT professionals now is $93,077.

IT salaries on a year-to-year comparison have risen 2.92%. The CEO of Janco Associates, Inc., Mr. M. Victor Janulaitis said, "The economic picture has created a positive outlook for job growth in general and Information Technology in particular. However, we are now seeing both an increase in attrition rates within the IT function and many positions that remain unfilled because qualified candidates cannot be found. This is causing CIOs and HR department to re-think both existing salary pay rates and the salaries that are being offered to potential employees."

The ten major findings from the salary survey are:

The CEO of Janco added, "CIOs are now more optimistic about the direction their organizations are moving and are looking forward to increased budgets and staffing. However, with the improved employment opportunities they are facing challenges in both compensation levels paid and promotion opportunities for existing staff. Some have already experienced the loss of highly qualified IT pros who have moved on and increased the attrition rate for IT Pros." 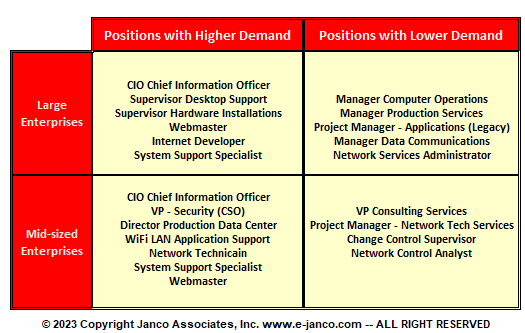 The 2019 IT Salary Survey is available via electronic distribution either as a standalone product or with the IT Hiring Kit which contains the IT salary survey, Interview and Hiring Guide, and a full set of 2019 IT Job Descriptions