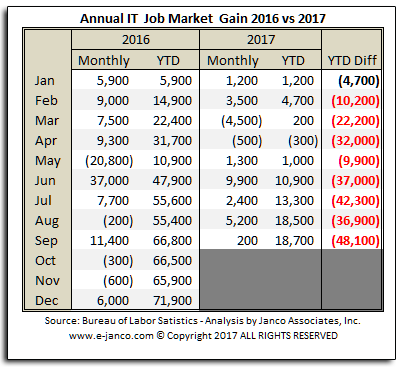 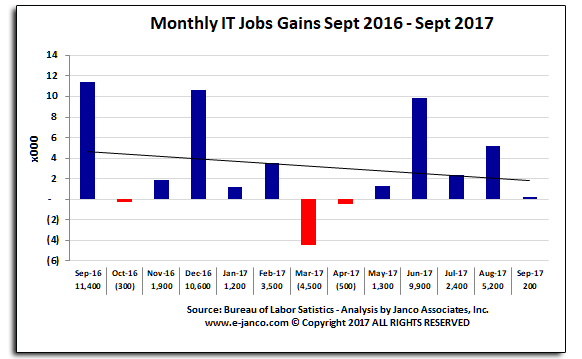 The CEO of Janco Associates, Inc., Mr. M. Victor Janulaitis, said "In the last 3 months only 7,800 jobs have been added to the IT job market.  Based on our conversations with scores of CIOs, CFOs, and CEOs; we see slowing is due to the impact of "events" which have placed a focus on maintaining continual operations versus new technology and application deployment.  As a result, we forecast that the overall IT Job market will see 22,500 new jobs added in the last three months of 2017.  This equates to the creation of 41,200 new IT jobs in 2017. " 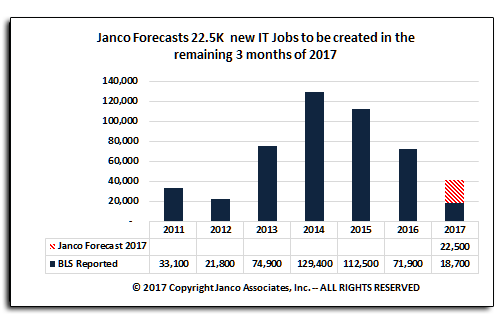 Mr. Janulaitis said, "The 41.2K new IT jobs created is not enough to cover just this year's IT graduates from US universities.  The only saving grace is the number of baby-boomers who are retiring is on the rise creating some upward mobility."  Janulaitis said, "Looking at the month to month number of IT jobs created, for the past year there is a downward trend in that number." The CEO added, “As we reported, previously, there continues to be a shrinking of telecommunication jobs due to mergers, layoffs, and automation.  The jobs in that field have been automated are permanently lost.  On the positive side, individuals who moved into telecommunications security seem to be in high demand."

Janco interviewed 83 CIOs, CFOs, and CEOs in the last several weeks as part of it's IT Salary Survey process ( https://www.e-janco.com/salary.htm ).  Janco's CEO said, "Optimism has waned with all of the major events from hurricanes, Las Vegas, and fires impacting overall perceptions." He added, "Hiring prospects for many IT Pros are marginal at best, except for IT Staff at the worker level who can be thrown into the business continuity processes."

Janulaitis added, "There is limited demand for new executive and senior management positions.  We believe that there could be ageneral increase in the headcount for IT staff towards the end of this calendar year.  If a  tax reform is implemented, one would expect that IT jobs would be the first ones that to be filled. The one area where there is increased demand is for experienced Disaster Recovery/Business Continuity senior and mid-level managers."

More information can be found on Janco's analysis of overall labor picture and the IT job market on Janco's website at https://www.e-janco.com/career/employmentdata.html.