(Park City UT) - Janco Associates 2023 IT Salary Survey has just been released. Its data shows high demand for IT Pros and inflation are driving up salaries.  Median salaries for the positions surveyed now exceed $101K.  The data from the survey shows that all salaries for IT Pros in large enterprises went up an average of 3.61%, with most of the major increases at the staff levels.  In SMBs salaries increase were 7.74% across the board with slightly greater percentages for IT executives. The Salary Survey can be ordered separately or with the IT Hiring Kit which contains the 2023 Salary Survey, the Interview and Hiring Kit, and up to 324 full Job Descriptions.

The CEO of Janco, Mr. M. Victor Janulaitis said, “In 2022 over 190,000 new jobs were added to the US IT Job Market which now is just over 4 million jobs. Despite layoffs by several tech giants, demand for IT Pros across almost all industries still exceeds the supply of qualified individuals.   Our data show that there are close to 200,000 IT jobs that remain unfilled due to lack of qualified candidates.” He added, “Interestedly, IT Pros in Mid-sized companies were able to see median salaries exceed the inflation rate.”

The CEO added, “This is the 30th year the firm has conducted the study, it includes 282 enterprises in North America.  A copy of a summary of the survey can be downloaded via our website at https://e-janco.com/salary.htm.”

The survey is now available for immediate download.  Major findings of the 2023 IT Salary survey are:

The President added, “Hiring is on a definite upswing for IT Pros but many IT jobs go unfilled due to a lack of candidates. CIOs continue to see a shortage of qualified IT Pros according to Janco.  This is the one book that every IT manager and C-Level executive needs to have. Companies and CIOs are moving rapidly to expand the role of IT in day-to-day operations. They have moved e-Commerce, security, social media engagement, and digital presentation to be top agenda items. That impacts the governance of Information Technology." 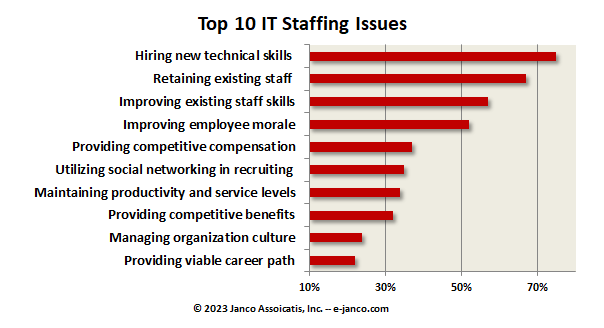