8,300 IT jobs lost from the IT job market in November according to Janco’s analysis

IT Job Market recovery stalls with 81,100 jobs lost in the last 12 months

Park City – UT– www.e-janco.com – After three solid months of recovery in the IT Job Market, 8,300 jobs were lost by IT Professionals in November.  CIOs and CFOs interviewed by Janco are concerned that a second shutdown will cripple the IT job market further. In addition, a second shutdown will devastate the SMB IT job market as more enterprises would close their doors for good.

The CEO of Janco Associates, Inc., Mr. M. Victor Janulaitis said, “The major loss of jobs for IT professions was in SMBs and consulting firms that service them. 7.5 million small to mid-sized business are disproportionately impacted by shutdowns.  Big companies are closing their doors permanently at a record pace, but that’s only part of the carnage. An uncounted number of SMBs are disappearing amid the shutdowns, and the drag on the IT job market from these failures will be huge. Historical data show that between 60% to 75% of SMBs close their doors forever after event that causes an extended closure like a mandated shutdown. Firms with fewer than 500 employees account for about 44% of U.S. economic activity, according to a SBA, and they employ almost half of all American workers.”

Janulaitis added, “The wave of silent business closures among SMBs goes uncounted and un-noticed in part because data is scarce, and owners of these firms often have no debt, and thus no need for bankruptcy court. However, the impact on the size of the IT job market is real in the number as those IT jobs just disappear. “

Janulaitis said,” There has been shrinkage in the number of IT Professionals classified as working for ‘Data Processing, Hosting and Related Services’ and “Computer Systems Design and Related Services”. IT Service providers are feeling the pinch as those two classifications account for over 75% of the 81,100 jobs lost in the last 12 months.” 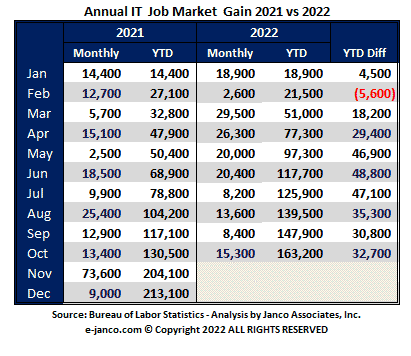 Janulaitis said, “It is not clear there is a bright side to this with the forecast that it will not be until late in the next summer until the pandemic is under control.” The CEO added, “There was a net loss of jobs in the last 12 months of 81,100 jobs for IT professionals. Hiring of IT professionals has all but stopped due to the uncertainty about the recovery.”

The CEO also said, “Spending for IT products and services continues slow as companies reevaluate the state of the economy globally as new waves of selected shutdowns occur. With more companies adopting WFH to address “social distancing” and avoiding in-office contacts, fewer companies are taking an aggressive approach to any additional spending for IT products and services.  It does not help that the election results point to more shutdowns and the Covid relief package has become a political ‘hot-potato’.”