May 6, 2009 - The average IT salary is a moving target. Unlike some industries, salary levels in IT bounce around from year to year - sometimes quite unpredictably.

Indeed, IT salary levels between 2004 and 2009, based on the following data from Janco Associates, in some cases changed dramatically year over year.

Bottom line: If you need a steady 3.1 percent annual increase, IT ain't for you.

Adding to the confusion, the IT job market is in a blue funk. “The job market for IT professionals is one of the worst I have seen since the late 1970's,” said Victor Janulaitis, CEO of Janco Associates. “There is a surplus of IT talent and companies are in a cost cutting mode. The dot com bubble was a cake walk compared to this job market. ” (Granted, he said that in January when things were even grimmer than now. )

But inside the storm cloud are some silver linings. IT salary levels remain some of the highest of any industry. Peruse the salaries on the following pages and realize many IT professionals earn far in excess of these figures - which are median stats - especially on the West and East coast.

And, IT isn't about to fade away. The fluctuations won't stop but it's widely agreed the industry will grow over the next several years. So delve into the following IT salary data and figure out how you can get a bigger piece of the pie.

Charts showing key compensation trends are provide in all versions of the study. An example of one of the charts is shown below. 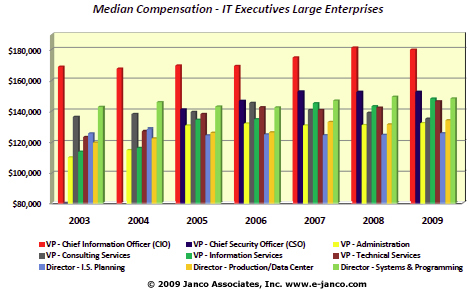 Excel sheet includes means and benchmarks for each position. To see a limited number of pages of the Comparative IT Salary Survey.

NOTE: Below is a chart of the latest median IT salaries for both large and mid-size enterprises by job levels.