Google Desktop going the way of Netscape -- Windows 7 Takes off

Google Desktop going the way of Netscape -- Windows 7 Takes off - Janco has just released its Browser and Operating System Market Share White Paper. The major findings are that in the last 12 months Microsoft’s browser market share has continued to erode - Microsoft lost over 6% in the last 12 months; Firefox’s market share is unchanged for the last 12 months; Google Desktop and Chrome now have just under 6%; and Netscape is no more. On the operating systems side, Windows 7 is being accepted at a pace is parallel to the way Window XP was in the 90’s. The CEO of Janco Associates, Victor Janulaitis said, “The last six months have been a mixed bag for Microsoft. Their browser market share has fallen to level that they back in 1998 with no end in sight. At the same time Windows 7 now has 12% of the OS market in less than 7 months since its release. ” 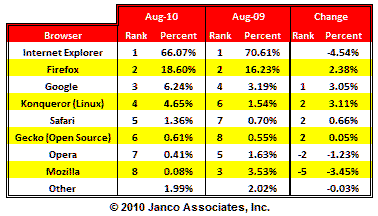 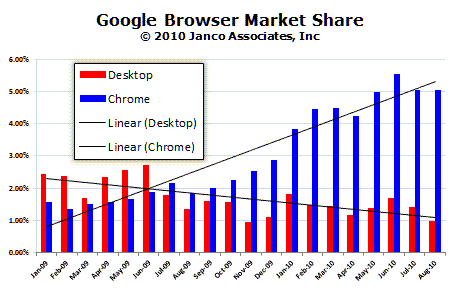 At one time Internet Explorer had over 90% of the total browser maket. Those days are long past as IE's market share continues to erode a percentatge point at time. 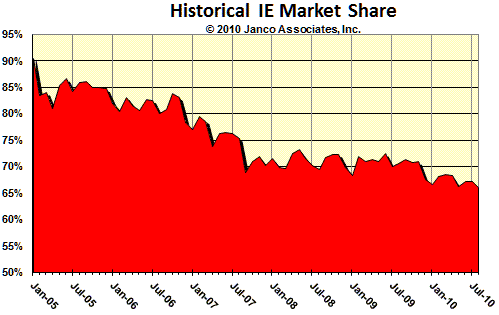 A major finding in the report is that Microsoft’s new Operating System, Windows 7 has 17.39% of the OS market less than 13 months after its availability. That is a major factor in Microsoft’s improved record earnings. Janulaitis said, “The last time that an OS was accepted as quickly the market was XP. Vista’s market share has peaked and is in the process of being decommissioned in most enterprise. ” 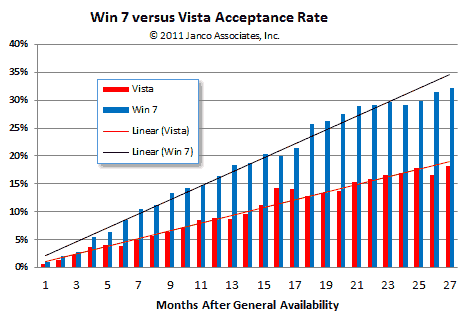