IT Staffers vs. Superstars. Janco reports that the February 2011 BLS data showed a slight increase in the number of IT-related jobs in January. The CEO of Janco, Victor Janulaitis said, “This increase is not as good as it looks since the BLS made a downward adjustment down of 45,300 for December. From the data it is not clear that IT employment is signaling that the recovery has started. "   He added however, “The fact that total employment for telecommunications, data process, information services, and system design sectors has risen slightly 0.22% (5,900 jobs seasonally adjusted) since January 2010 is a good sign. ” 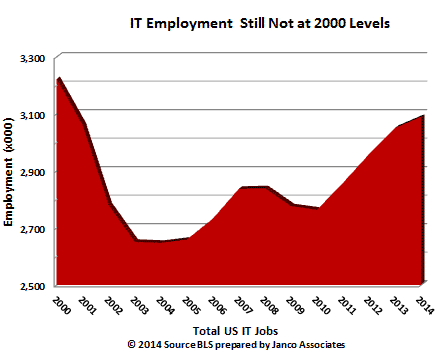 The job picture is mixed for technology professionals. The data shows that telecommunications is still a depressed market with a loss of 50,400 jobs since January 2010 while there has been a compensating increase of 52,700 jobs in the computer systems design and related services sector. Janulaitis said the disconcerting fact is that if you look at the data that was published in January and factor in BLS adjustment, the December data shows a decline of 1.28% in IT jobs versus an increase of 0.36% that was originally reported. ”

Janco feels that the recovery has not taken hold and the IT job market will be soft for at least one more quarter. Janco predicts there will be more churn in IT staff as CIOs accelerate their move to more flexible staffing models. CIOs are outsourcing more technical work, including managed IP services such as VoIP and VPNs. They are hiring more contractors for desktop and security services, and they are putting more applications such as remote backup in the cloud. At the same time, they are looking to hire IT people with business and analytical skills, such as risk management and project management. CIOs report that they're having trouble hiring IT people because either they can't find IT professionals with the right business skills or they can't afford them. All of this means more turnover in IT departments.