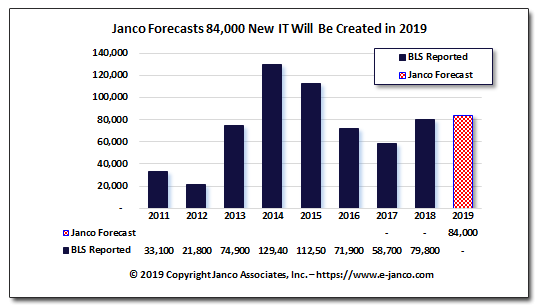 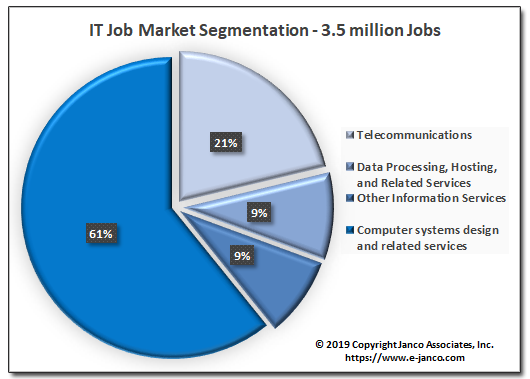 The CEO said, “The only dampening factor is the recent downturn in the equity markets and the slowdown in China’s economy.  In addition, technology mega corporations, like Apple, Google, and Facebooks, are faced with a prospect of no to slow growth from international economic prospects and increased scrutiny due to privacy and security concerns.  This could be a dampening factor on U.S. IT Job Market Growth.”

The CEO added, “The median salary for all IT Professionals based on our latest salary data is $93,077.  That is $2,628 higher than the same time last year.  Supply and demand is working in favor of qualified IT professionals.”  More information on this available on our web site https://www.e-janco.com/salary.htm.

Janulaitis noted, “IT Pros are much more mobile as they have the luxury of a great job market. This has increased the attrition rates within the IT function in many enterprises. For the first time in several years, CIOs are now dealing with staff retention issues.  To combat this, many organizations have budgeted across the board increases in compensation for many key positions to minimize potential loss of key staff as the job market continues to stay hot. "

Analysis of IT Job Market growth shows that in 2018 there was an addition of 79,800 new jobs.  That is 21,000 more new jobs than were created in 2017.  Janco conducted several spot interviews with two dozen CIOs in December.  All of those interviewed said they were actively recruiting for IT professionals for new development activities and replacements for those who have left in the last few months. Attrition rates are the highest they have been in the last several years. Janco also found that several organizations have slowed the hiring process as they work to absorb the new hires. 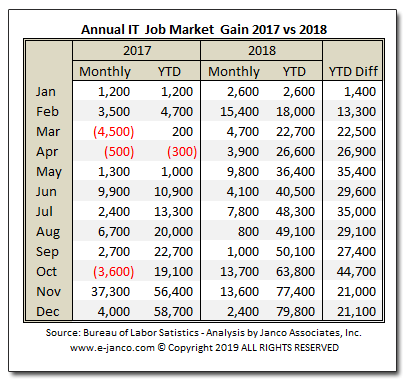 The CEO of Janco added, "IT and HR recruiting managers are optimistic.  They are focusing on additions to the IT staff as they begin the new year. However, the recent stock market corrections and the increase in interest rates by the FED has caused concern.”