Park City, UT - The 2015 Mid-Year IT Salary Survey, just released by Janco Associates and eJobDescription.com, is good news for IT Professionals. The survey shows that hiring and salaries have improved for IT positions in most North American metropolitan areas.

The CEO of Janco Associates, Mr. Victor Janulaitis said, "For the first time in over 6 years salaries for IT Pros have moved up almost across the board. We believe that this is due to the fact that over 139,100 new IT jobs were created in the last 12 months and that the economy seems to be in a recovery mode. " The CEO added. "Janco projects that for 2015 the total number of new IT jobs added will be over 160,000 versus 112,000 that were added in 2014". 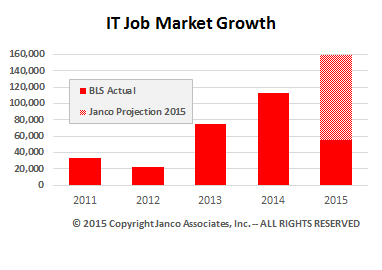 The findings presented in Janco's 2015 Mid-Year IT Salary Survey include: