CIO Millionaire Club -- Top 40 Highest Paid CIOs - The first CIO to make over a $1,000,000 a year was Duwane Peterson in 1987 at Merrill Lynch. Today there are at least 40 of these individuals who are in that club. In 1987 few knew what IT was and what the role of the CIO and CTO were. Today, there is even a TV series on cable with a CTO and those contending for that job embroiled with career progress and data security management - Mr. Robot on the USA network. 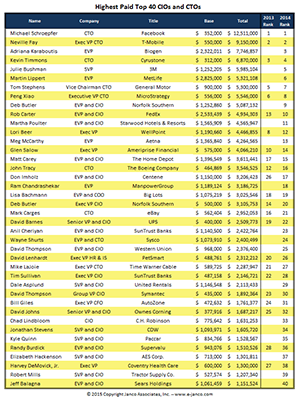 The role of Million Dollar CIOs and CTOs

The chief information officer's (CIO) role, responsibilities and influence is growing in today's boardroom. And the CIOs job itself is expanding as well. The CIOs of the next decade face many challenges. The CIOs who will succeed will have a common set of skills.

Role of the million dollar CIO is to be part of the overall enterprise executive management team. Responsibilities include: