Who are the highest paid CIOs?

The highly paid CIO ranks are diverse and very stable

The CIOs who are paid the most are a group of individuals who are not pure technocrats. Rather they are individuals who understand how technology can be applied to the operational environment of the enterprise (see CIO Roles and Responsibilities).

Janco found 35 CIO whom we considered as "highly paid". The chart below contains data that we have captured from public records. We do have information for a similar group of individuals who have the same role in privately held enterprises. The compensation there is similar, however, since there often is "limited" stock in those enterprises the performance bonuses are tied more closely to a profit participation model. 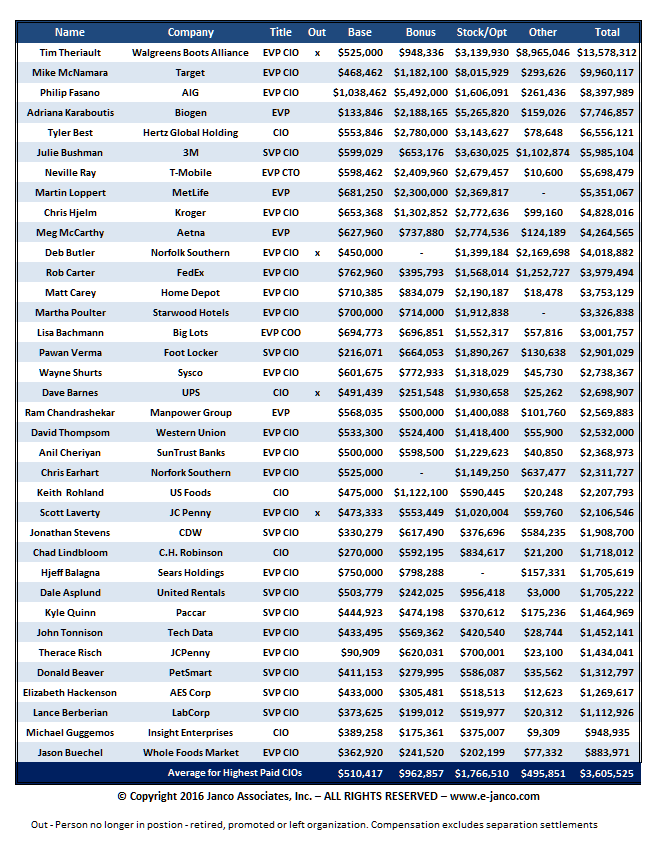 Some facts that we have established for this group of individuals are:

According to M. V. Janulaitis, CEO of Janco Associates, at least two thirds of client companies doing CIO searches are requiring the recruiter to include women and minorities in the candidate pool. Further, he says, when “all else is equal” between a male candidate and a female or minority one, companies are tending to choose the latter specifically to enhance the diversity of perspectives on the management team.

“I truly believe that at both the C-suite and board levels, there’s a belief that diversity of perspective and experience is beneficial,” Janulaitis says. “They want to find something that’s going to augment and improve what they already have.”
But achieving that end can be challenging. Unfortunately, there are too few women in senior, experienced roles to populate the candidate pools of all diversity-minded companies. So it’s not enough to decide at the CFO level to hire a woman. The relevant decisions must be made and opportunities offered earlier, at the developmental stage of potential finance leaders.