There was a net increase of 20,400 seasonally adjusted IT jobs in Julyaccording to the latest BLS data. There was an improvement in computer system design and related services accounted of 10,400 jobs; 7,000 in telecommunications, 1,900 jobs in Data Processing, hosting and related services; and another 1,100 jobs in other information services. The CEO of Janco Associates, Inc. (www.e-janco.com), Victor Janulaitis said, “This looks like a marked improvement in the job prospects for IT professionals. There still is an issue with the fall in the percentage of individuals looking for work; however we see more CIOs looking to reduce their expenses by replacing consultants and contractors with full time employees. ” He added, “This a not a gain in the total number of IT jobs, but it does increase opportunities for IT professionals who are not consultants or contractors. ”

The IT job market growth trend for IT Professionals is down, See chart below. 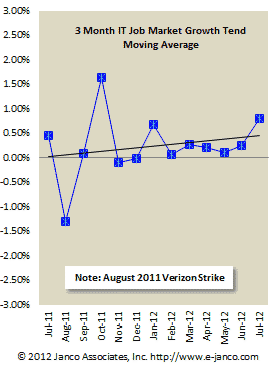 At the same time Janco's CIO Hiring Plan Forecast looks upbeat with CIOs looking to replace consultants and contractors with full time employees. There is general consensus that they will be hiring next year at this time.

The number of new jobs created continues to be lower than the number of jobs needed for the US economy to stay even with adult population growth. The Labor Department has reported the economy added 163,000 in July up from 80,000 in June (69,000 in May) . Unemployment is highest in Nevada and California.

For the first time in several months there were gains in the total number of jobs in all sectors of the IT job market. There was a net increase of 20,400 seasonally adjusted IT jobs in Julyaccording to the latest BLS data. There was an improvement in computer system design and related services accounted of 10,400 jobs; 7,000 in telecommunications, 1,900 jobs in Data Processing, hosting and related services; and another 1,100 jobs in other information services.