Tech hiring at standstill not a good time to be out of work - The hiring of information technology workers is at a standstill for the first time since the dot-com bust more than a decade ago, according to a new study.

A Janco Associates survey of 97 chief information officers in North America finds that only 12% are looking to expand the size of their information technology departments.

"For the first time since the dot-com bust, Janco's metrics show that hiring by CIOs is at a standstill - there is a high degree of uncertainty in the economic climate," said Janco CEO Victor Janulaitis.

Just 5% of CIOs are looking to increase their IT staffs for new initiatives, a low level not seen since the dot-com bust began in March 2000, he told IBD.

In its continuing survey of CIOs, Janco has found that many CIOs have turned more cautious in the last month. Consulting firm Janco conducted its most recent survey in late March.

The Janco survey comes on the heels of the latest U.S. Bureau of Labor Statistics report that showed only 5,400 jobs created for IT professionals in March, down from a seasonally adjusted 6,300 in February and 11,700 in January.

Of particular concern are the labor market participation rates at record low levels, Janulaitis says. The true unemployment rate would be more than 11% if you include discouraged workers who have dropped out of the labor market, he says.

"The year-to-year comparison of workforce participation shows how deep a hole we are in," he said. "Until those percentages turn around, the overall recovery will be weak at best. If that is the case, then there is a strong possibility that IT demand will be dampened, and overall IT job market size could fall back to the levels of 2010 and 2011. "

At the end of 2012, tech companies were optimistic that the economy was going to turn around. But since then, they've seen U.S. government inaction over the sequester cuts, tax increases and the impact of ObamaCare on hiring new employees, Janulaitis says. On top of that is the unstable political situation caused by saber-rattling by North Korea and Iran.

CIOs have been told that they can hire staff to keep their organizations going, but not add staff for new initiatives, he says.

Janco's says, "For the first time since the dot com bust Janco's metrics show that hiring by CIOs is at a standstill - there is a high degree of uncertainty in the economic climate…" 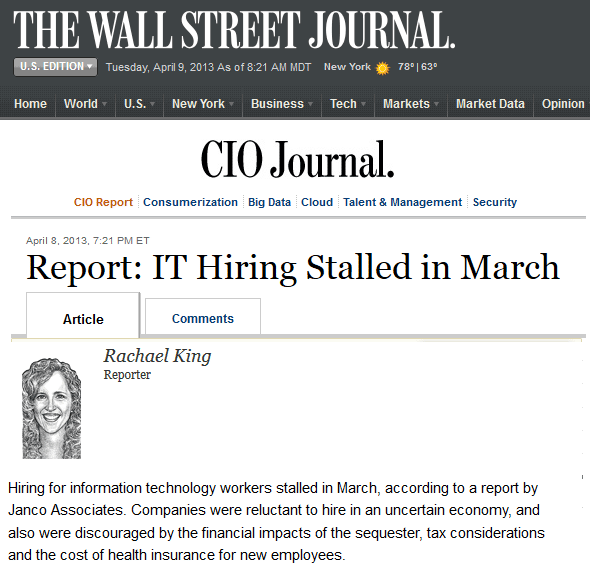